You don’t have to go home, but you can't stay here 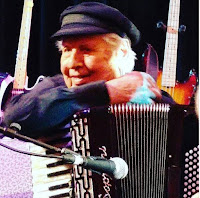 That’s what my musician ex used to say to the audience at the end of every gig when people continued to mill around the stage and just didn’t want to leave.

I felt like that at the end of this year's Williamstown Literary Festival. I didn’t want the gig to end.

This year there was an extra special buzz. The thirteenth festival, it entered adolescence and is maturing into one of the 'must go to' literary events.

As a writer and book lover, I'm excited to have the WLF on my doorstep. I was proud to be part of the program this year, with the opportunity to be in discussion with Olga Lorenzo and to be part of the Stereo Stories Live event with my 90-year-old father, Salvatore.

I've done many Stereo Stories gigs, but I was particularly nervous that night because I'd realised how much bigger it had grown, judging by the sea of faces in the audience. Then I looked around the table and there I was in the company of fantastic writers and musicians, Vin Maskell (founder and MC), Paul Bateman, Rijn Collins, Brian Nankervis, Andy Griffiths, Clare Boyd-Macrae, Zoe Krupka, Smokie Dawson, Jack Gramski, Peter Maskell, Anthony Shortte, Rob Gador, Stephen Andrew, Jennifer Lund and of course, my dad, Salvatore Romita. Not only was I suffering from nerves, but also my Imposter Syndrome kicked in.

After we had performed our piece, Lili Marlene, (me reading, Dad playing piano accordion) we helped him off stage as he leant heavily on his walking stick. The audience continued to applaud him. He was moved by the reaction and the kindness shown towards him.

That night for me was the epitome of what the WLF is about – a warm, appreciative audience, a love of words, a love of stories, and generosity of creative and receptive spirit.

Sadly, for this year, I've been forced to go home but I'll carry that memory with me until next year's festival. It will be fantastic as always.

We know how to do words in the west.